Everytime I start writing down bits of my memoirs, I feel the need to explain how I got involved with the business of art & culture in the first place. Let me call it 'LOVE' this time. Love of life, of artistic expression and of music in particular, which led me to live a second life after 23.00 hours [ from monday till thursday actually ].

The year is 1979. At the age of 15, dissatisfied with Dutch media already, I became an addicted listener of BBC DJ John Peel. Away with those big-record-company money grabbing popstars, you know who they are. New names, new sounds, new philosophy for me, assimilating the thoughts of Dutch anarchist Anton Constandse...
For presumably political reasons though, the two bands that influenced me in puberty most were not popular at all with Mr. Peel: the anarcho-peacemakers of Crass and the equally provocative industrializers of Throbbing Gristle.

Crass, shouting out loud that Punk is dead, I had met briefly during their "European tour" in 1980. About a year later, I toured with the Poison Girls, Rubella Ballet and Omega Tribe through The Netherlands as drummer of post-punk band Niet Reëel Aanbod [ N.R.A. ]. On tour, Crass seemed to be right about forementioned statement, punks demanding 'Faster AND Louder', and in the meantime Rubella Ballet's drummer Sid Ation and I were discussing two great musical records by a band called 23 Skidoo… The Gospel Comes To New Guinea and Seven Songs.

Not only was I making music, I was also writing about it. Friends of mine had started a magazine called BOH [ Binnenlandse OntwikkelingsHulp ] and I was contacting my favorite musicians in order to write about them.
I'm not sure how I got hold of the adress of 23 Skidoo. But despite all the alcohol and drugs I've been consuming over the last twenty years, I just came up with Martello Street 10, and according to the internet my memory has not been letting me down this time: Martello Street 10 it is. The adress of the legendary Death Factory studios and Industrial record label of Throbbing Gristle.

Pretty soon I received a reply from Fritz Catlin aka Fritz Häaman. Besides a personal letter that I thought I had lost during the years, there was a collage on paper Fritz had made and xeroxed information on the band that I could use for the article. Fritz mainly wrote about a double cassette release for the Dutch label Kremlin records, that never was to be released. In the end, the article was never written, nor was the collage ever published; the magazine ceased to exist. 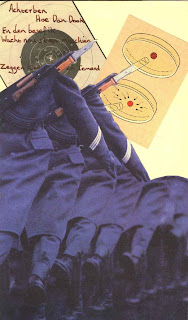 After meeting up with Crass in 1980 and still bothered with questions such as What do you want to become when you've grown up?, I decided to attend a school for cultural work in order to [ if I were ever to grow up in the first place ] organize concerts for Crass and similar artists.

In 1982 I got involved with youthclub Paard van Troje [ Trojan Horse ] in The Hague as an apprentice, where I started to organize video screenings, only to name here Joy Division's Here Are The Young Men and Tuxedo Moon's Ghost Sonata. At the time the club was hardly attracting any visitors, so in the end all of those present would crop up in the videoroom to get stoned. After a year the Boss took over and organized showings of Rambo 1, 2, 3 and 4. As a result of that, I offered to organize 'art-events' in The Chappel of the Trojan Horse. Fact; the youthclub had been a Catholic orphanage in earlier days, and that particular space on the topfloor of the club still had typical characteristics such as niches. Having met Amsterdam-based art-organizer Menno Grootveld at a D.I.Y. event in Nijmegen, he supplied me with a demo cassette and xeroxed information from and about Laibach [ Lubjliana, Slovenia ] and the Last Few Days [ London, UK ]. I trusted in Menno's confidence in the whole project and ultimately I discussed the bands with the staff, they told me to go ahead and organize the event. 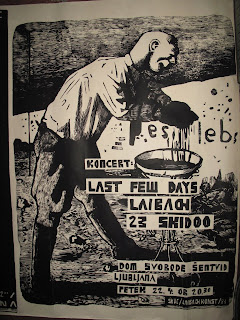 I had never heard of Laibach before, but I did hear about the Last Few Days, as one of the groups that had attended the Final Academy, a tribute to American writer William S. Burroughs in the form of an art event which took place in London 1982.

When the two army dressed teams of Laibach and LFD arrived at the Chappel on November 30th 1983, a conflict broke out within minutes. My friends of the magazine had painted the figures of some Russian orthodox priests on one of the walls of the space. These figures were supposed to function as our logo. But Laibach decided they needed that wall for their own banners, neglecting the fact our audience had never seen our logo before. The discussion that followed wasn't very nice at all. Laibach stated they refused to play if they weren't allowed to cover up our logo with their flags. I insisted our logo should be visible as well as theirs. In the end, after some threats from both sides to cancel the event, a compromise was made possible so the bands could focus on the soundcheck.

Sitting on a church bench, keeping a suitcase containing a tapedeck between my legs, I happened to sit next to the drummer of both bands, so I commented in his ear rather nervously that this jazzrock that LFD played during the soundcheck was pretty much different from the demo I had received from Menno Grootveld. The drummer laughed and and eased me by stating the concert itself would be very different. Than his eyes almost dropped on my suitcase, which had my name written on it. 'Blokdijk? Do you know Blokdijk or are you maybe him? Tony?' It took me a couple of seconds to realize… This guy's hand reached towards mine. 'I'm Fritz… Fritz Häaman.' 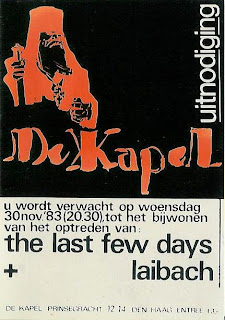 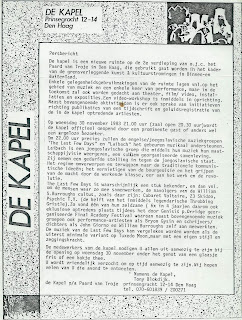 I must confess I was a bit overwhelmed. What a curious coincidence. First of all I must have mumbled apologies for not having published any article or collage etc. etc. Fritz didn't seem to mind [ much ]. I felt so weird about our first acquaintance in real life. Expect the unexpected…

The Last Few Days played first. If I want to be there again, I play the recording I made and keep as a precious jewel, although this tape has a face that grew old. After 25 years of witnessing concerts, I believe this concert was the one that probably has touched me the most. To witness Laibach was another great experience, but for me it just didn't even come close to the impact of the LFD presentation. Looking back, I can't deny the 'banner' conflict had surely to do with this.

The next day, national newspaper 'de Volkskrant' came up with quite a long review. I'll try to translate it some time. 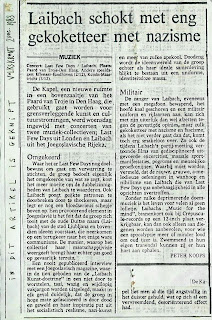 I did see Fritz and the Last Few Days again during the Romantic Aesthetics filmfestival in Amsterdam 1986. Daniel Landin had already left the band, which was rather disappointing without him, although not as disappointing as most spectators present claimed; I kind of vaguely remember tunes and sounds in clouds of smoke that I'd love to hear back again some time… Fritz played live with 23 Skidoo, who closed off the festival quite succesfully - according to my memory in Just Like Everybody Part 2-style. We talked for about two minutes in a very noisy hallway and that was it - for the time being I guess.


Epilogue: Fritz responded to the article above just a few days later, and we've been in touch on and off. We collaborated with rapper MC Kraker on a track, and I keep enjoying his work as a producer under the monniker Hashashan and with his band Skintologists.


'Super 8 footage from The Final Academy 1982, somewhere are the tapes to do a sound montage but in the meantime the music is "Crowtime" by Skintologists, featuring Sam Mills on guitar.'