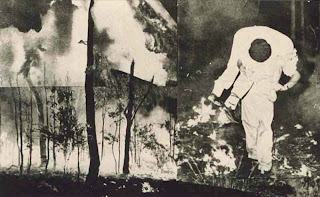 'Musical entity Salò Mentale was about drugs, art came second place, as I see it at the very moment. But that's not always the case', I wrote in 2010.

The story starts in 1982. Punk(rock) wasn't dead yet but very manic and very depressed. I find myself as a seventeen year old social-cultural work apprentice in a youth club in The Hague, invited by my supervisor to select movies for showing. She hands me these catalogues - 'pick what you like' - except one: Salò o le 120 giornate di Sodoma by Pier Paolo Pasolini. 'Fascist, sexist' and a short explanation followed, pointing her finger in the air and shaking it.

Almost two years later I took my chance. I had obtained my own space in the attic of the youth club, which was (called) De Kapel, and was able to program whatever I liked within my monthly budget of 500 guilders. On November 30 1983 the first official event was organized in collaboration with Laibach and the Last Few Days, under the direction of Menno Grootveld for NL Centrum in Amsterdam. On May 12 1984 I organized an evening consisting of a concert by my own experimental musicgroup Salò Mortale (previously called De Gestalt), followed by headliner Salò or the 120 days in Sodom. I must've gotten pretty excited about that particular theme during the period, naming my band after a movie I hadn't even seen yet, although I also must admit I was already fascinated by the book Are we all nazis? by psychologist Hans Askenasy at the age of 15. And there was a lot of "Crass & Throbbing Gristle" on my mind as well, as we continued to struggle against (or should that be "in"?) society while Ian Curtis had hanged himself. Anti-Orwellian all the way...

Wikipedia: 'The adjective Orwellian describes the situation, idea, or societal condition that George Orwell identified as being non-favourable to the welfare of a free-society. It connotes an attitude and a policy of control by propaganda, misinformation, denial of truth, and manipulation of the past, including the "unperson" — a person whose past existence is expunged from the public record and memory, practiced by modern repressive governments. Often, this includes the circumstances depicted in his novels, particularly Nineteen Eighty-Four.

Orwell's ideas about personal freedom and state authority developed when he was a British colonial administrator in Burma. He was fascinated by the effect of colonialism on the individual person, requiring acceptance of the idea that the colonialist oppressor exists only for the good of the oppressed person and people.'

So the group name changed from De Gestalt > Salò Mortale > Abrahadabra > 418 > Salò Mentale. Basically Salò Mentale meant myself making music with someone else. Members (and influences) came and went over the years. I won't reveal any identities of musicians (yet), I'm not sure if people would like to be remembered as being involved. Out of three bandmembers who died over the years, I'll only mention KK who is represented elsewhere on this blog*. As far as the music is concerned; we started off as weird noise adepts, but I got bored with improvisation and wanted songs, real songs, but when there were finally songs, I didn't want them any longer. I felt dissatisfied with the result. The end-result of an almost endless consumption of amphetamines and hashish / marihuana must be clear by now.

We played our music (and occasionally our videos) live several times over the years, mostly out-of-tune and out-of-rythm, but there were brilliant moments too. A tour to Austria and Hungary was announced, but after 30 minutes of travelling out of The Hague the Trespassers W bus, that we had rented for a small sum of money, broke down, and we didn't have the budget instantly to replace it, so the tour had to be cancelled after driving 50 km at 40 km per hour. The best place to make music seemed to be our homes.

We liked to record with the means we had at the time; usually (cheap) stereo-, four track or walkman cassette-recorders and reel-to-reel recorders. On one occasion sound artist Justin Bennett helped us using a "proper" recording setting with equipment from the Royal Conservatory. We produced several audio cassettes, contributed to some cassette compilations, and a 12" record was released by Grijs records. A plastic bag containing hours of unique recordings was taken to Budapest by mistake and vanished...

The whole thing stopped more or less in 1999, as a side-effect of heavy depression and attempted suicide. The last concert we did was at a wedding of friends.

No more contact (apart from accidental) had been established between members since, until the Internet got hold of several individuals... But that's a different story.

Three tracks on 'The Death Project' [audio cassette C-60, Amersfoort 1988, Lor tapes]:
- Take me Down and don't Bother me
- Hidden Documents of a Past to be Proud of
- "This is the Space Age and we are Here To Go" (William S. Burroughs - Place of Dead Roads)